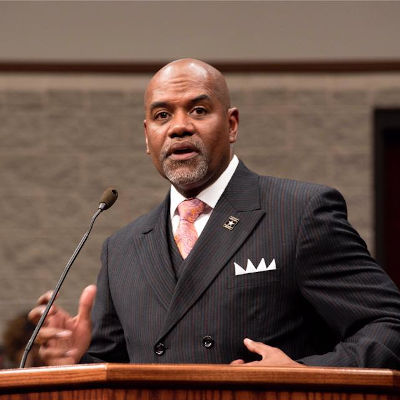 Reverend Dr. Frank K. Thomas, a native of Detroit, Michigan, joined the United States Army after completing his secondary education at Henry Ford High School in 1982. He served as a Combat Engineer for 25 years ending his career as the Senior Military Science Instructor at Wake Forest University. He was most recently the Director of Custodial Services, Facilities and Campus Services at the university. He is a member of the prestigious Sergeant Audie Murphy and Sergeant Morales clubs; a life member of the Association of the United States Army, the Non-Commissioned Officers Association, and the Big Red One (BRO) Society. His military awards are extensive…they include the Meritorious Service Medal and the Corps of Engineers Bronze Order of the de Fluery Medal.

Dr. Thomas accepted his call to the gospel ministry in June 1985 and was ordained in January 1989 at his home church New Jerusalem Temple Baptist Church in Detroit, Michigan. He received a Master of Ministerial Arts degree from the A.L. Hardy Academy of Theology in Seattle, Washington and an honorary Doctor of Divinity degree from St. Thomas Christian University in Jacksonville, Florida. During his military career, Dr. Thomas served military congregations in Korea; Fort Lewis, Washington; Aschaffenburg, Germany; Fort Ord, California; and as pastor of congregations in Kosovo and Schweinfurt, Germany. He also served in several ministry capacities within baptist churches in Olympia, Washington and Orange Park, Florida.

Prior to his retirement from the army in December 2007, he served as Interim Pastor of Mt. Zion Baptist Church in High Point, North Carolina. In June 2009, he accepted the church’s call to become their 6th Pastor. During the first year after his arrival, he worked with the city on a project that resulted in the church building at 753 Washington Street being listed with the National Park Service as a Historic Site. The church has also purchased a Hammond organ and a 15 passenger bus with car-port. They have completed a restoration of the sanctuary and were recently the (gift) recipient of a full renovation project for the fellowship hall by F.L. Blum Construction Company of Winston Salem in 2016; along with adding a computer lab with computers donated by the City of High Point. Mt. Zion has also partnered with High Point University (HPU) to operate a Community Writing Center, an after-school program where HPU students mentor elementary and middle school students.

Dr. Thomas is currently the Executive Secretary for the Rowan Missionary Baptist Association; the former president of the Ministers Conference of High Point and Vicinity; and a Life Member of the National Association for the Advancement of Colored People (NAACP). He is the 2020 recipient of NCCJ’s Brotherhood/Sisterhood Citation Award. Committed to the community, he formerly served on the Board of Directors with the Piedmont Health Services & Sickle Cell Agency (PHSSCA); High Point Jail Ministry; Shepherd Center of Winston-Salem; and currently with the High Point Chamber of Commerce Advisory Board (2019/20 Chair); Business High Point Foundation; United Way of Greater High Point (2018 Campaign Chair); Board of Visitors at High Point University; Board of Directors of American Heroes of NC; Board of Trustees for Foundation for a Healthy High Point and High Point Medical Center.

He and his wife Mary have three daughters, Alicia, Tiffany and Crystal and are the proud grandparents to three granddaughters, Autumn, Zuri and Amari.